The club has also worked hard to support emerging teams outside of the London area and play a leading role in supporting junior development programs in English schools.

In addition, North London Lions has made a huge commitment to the all-British Australian Rules Football Team in providing coaches, equipment, players and facilities.

Everyone is welcome, from those who have played for years back in Australia right through to those completely new to the game.  We’re  looking for Aussies, Brits, Irish, and other EU’s.  In fact it doesn’t really matter where you are from, as long as you are interested in playing Aussie Rules! 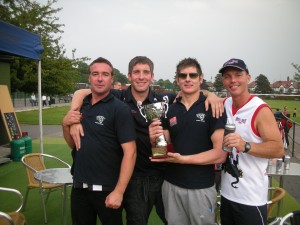 We’re proud of our reputation as one of the most social aussie rules clubs in London,  and also one of the most competitive.  While we are based in North London, we draw players each year from all over town.  We train all Season in Regents Park, right in the centre of London, on several tube lines, and so very accessible.

Each week we field 3 teams, meaning there are definite spots available for players of all standards.  If you want to play, we can guarantee you a game.

We take our footy seriously on the field, and last year the Lions won the AFL London Premiership in 1st grade, and were unlucky to be edged out by 2 points in the Grand Final for 2nd Grade.   3rd grade had another successful year to make finals and finally go out to one of the eventual grand finalists.   All three teams are looking to continue this form into the new Season.

However we also aim to have a seriously good time off the field.  In 2012 we managed a couple of international football trips (to Stockholm, Corfu, and Munich for Octoberfest).  We also did a Pre Season Boot Camp, the Thames Boat cruise party, an AFL Grand Final party and much more.

Obviously Aussie Rules footy in London won’t be the most serious sport you’ve ever played.  Most of our players juggle work, travel, the missus, and (regular) hangovers.  It’s not always possible to make training, and you’ll probably miss a few games along the way too.  We get it, and we’ll all work it out as we go along.  So don’t let that be the reason that you don’t give it a go.

Aussie Rules is a great way to keep fit, to meet new people, to get out in the sun, and generally to have a great time in London during the Summer.  So don’t hesitate to get in touch and sign up, or even if you just want to ask a few questions.

Just go to the Contact section on the menu above, or click HERE to get in touch.

Dunlop Volley shoes have been an Australia icon since 1939.

Originally designed as a tennis shoe, they are now just as likely to be seen relaxing at the pub on in the park as they are to be on a tennis court.

The simple canvas style, comfortable fit, and impressive grip means has made them a favourite for millions of Australians for several decades, and now they are making a new home for themselves in the UK.

Boot Camp is a regular part of pre season at the Lions, and a chance to escape London for a weekend of fitness, training and footy.

Previous years have seen the Lions out and about in Southampton and the New Forest, but with a new year upon us we’re switching things up and heading the lovely Birmingham this time around. It might be a different destination, but expect all your Boot Camp favourites, including news from the Coaches on what the year holds, plenty of hard work on the track, and a night out on the town as well.

This year we’re also including a game of footy, thanks to the lads at the Birmingham Sharks who are keen to get involved.

The dates to keep clear are Fri 15th, Sat 16th and Sun 17th March. We’ll be leaving London via train on Friday evening, and dragging ourselves back on Sunday afternoon. All other details are top secret, and you’ll learn more on the train.

All you need to know for now is that the total cost for the weekend will be £80 max (including accomm, travel and a few surprises along the way). Numbers are strictly limited to 24 max, so get to training and make sure you have a spot – about half are taken already.

North London Lions have a long and proud association with Australian Football in the UK. Established in 1990, they are a founding club of the BARFL (forerunner of AFL Britain – London League) and have established themselves as one of the most popular teams in the competition.

Winners of the pre-season competition twice (1998, 2000), and after many agonising preliminary final loses were finally rewarded with their first Grand Final victory in 2001. This was followed up with a back-to-back flag in 2002.

Aside from our BARFL involvement, North London Lions sees itself as a club with a serious commitment to promoting Australian football to the wider British community and the world. Over many years it has dedicated itself to a number of initiatives that have done much to promote the game beyond the Australian expatriate community in London.

In particular, the club is proud of its pioneering efforts in establishing links with leagues outside the UK. They were the first British club to play against a representative Danish team in Denmark (1992), and the first against an Irish club in Ireland (1999). The 1992 match against Denmark is arguably Australian football’s first ever International, and the club continues to commit itself to at least one overseas match every year. The club has also worked hard to support emerging teams outside of the London area and we play the leading role in supporting junior development programs in English schools. In addition, North London has made a huge commitment to the all-British Australian Rules Football Team in providing coaches, equipment, players and facilities.